Proposition 30, officially titled Temporary Taxes to Fund Education, is a California ballot measure that was decided by California voters at the state-wide election on November 6, 2012. The initiative is a measure to increase taxes to prevent $6 billion cuts to the education budget for California state schools. The measure was approved by California voters by a margin of 55 to 45 percent.

Proposition 30 provides for personal income tax increase over seven years for California residents with an annual income over $250,000, to be implemented retroactively starting January 1, 2012 through the end of 2018. The measure also provides for an increase in the state sales tax by 0.25 percent over four years (from January 1, 2013 through December 31, 2016).

Proposition 30, The Schools and Local Public Safety Protection Act of 2012, approved by the voters on November 6, 2012, temporarily increases the state’ s sales tax rate for all taxpayers and the personal income tax rates for upper-income taxpayers. The revenue generated by the measure’s temporary tax increases is included in the calculations of the Proposition 98 minimum guarantee raising the guarantee by billions of dollars each year. A portion of the new revenues therefore would be used to support increased school funding, with the remainder helping to balance the state budget.

The new revenues generated from Proposition 30 are deposited into a newly created state account called the Education Protection Account (EPA). Of the funds in the account, 89 percent is provided to K-12 education and 11 percent to community colleges.

How does Prop 30 Funding Work?

2.  County offices of education, K-12 school districts, charter schools and community college districts spend Proposition 30 money according to their adopted spending plans, which must be made public.

3.  After the close of each fiscal year, Proposition 30 spending is audited to determine if the money was used according to law.

Pursuant to Article XIII, Section 36 of the California Constitution, school districts, county offices of education and community college districts are required to determine how the moneys received from the Education Protection Account are spent in the school or schools within its jurisdiction, provided that the governing board makes the spending determinations in an open session of a public meeting. 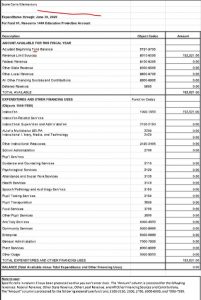